skip to main | skip to sidebar

For some reason, Mikey often reminds me of the old, stereotypical surfer dude. Especially when he's having an awesome time, like at agility class, I can't help but to look at him and say 'Duuuuuude!'
So, here was our course from last night. I'm having a really bad RA flare, and really had no business going to class, but went anyway. I figured I would hurt either way, but at least I would be having fun. Predictably, Mikey was great on everything but the weaves. Actually, the first time we ran the course, he nailed the weaves! Of course, I had just stepped on his toes right before we got to the weave poles; maybe I should try this every time? Just kidding, seriously! The second time we ran the course we had to restart the weave poles like 8 times. After talking to my dad today, though, I feel a little bit better. The place I'm going for classes does very little AKC agility, so the weave poles are the full, Masters level, 24 poles. Their 'competition' class has a mix of people from me and Mikey's level, all the way up to people competing at the Masters level. As my dad reminded me, a full 24 poles is a lot to ask of a novice level dog, and Mikey usually looses it in the last few poles; it's just hard for him to concentrate that long at his stage. And in a competition setting, we're only looking at 6-8 poles, which Mikey (usually) doesn't have a problem with. 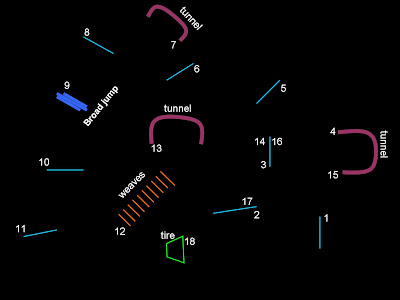 I've got to get a picture after I groom Holly and Mikey next time. Since I groom them in sections, I end up with all these balls of different colors of undercoat. White from their ruffs, light tanish-grey from Holly, dark grey from Mikey's sides, and black from his topline. It's really pretty.

As a side note, I have some questions for all of you that have merles, and this may apply to tris too. When I got both Holly and Mikey, their nails were all still white, and both had almost entirely white left ears. By the time Holly was around seven month old, several toe nails had turned a brownish black, lots more color had shown up on her left ear, and a gold colored 'fairy kiss' was visible next to her nose. And that was it, no noticeable changes since then. Well, it seems like Mikey is still changing, at three years old! It's only been in the last five months or so that two of his nails have slowly turned black (and no, it's not bruising). And I've noticed recently that the black freckles he has over his nose are more visible in certain lighting than they used to be, although the hairs are still white. Plus, I've always wondered if he carries a mask. He has a smuttiness around his mouth in the points area (his points go directly into his blaze on the sides, see pic below, which is slightly distorted because I cropped it so much so you could see the area around his lips) and I've wondered if this is a black mask, diluted to look smutty due to merling. Anyway, as his greys have deepened as he has aged, I've noticed that the smuttiness is more pronounced. Anyway, just as a curiosity, I was wondering if any of you with merles have noticed these kinds of late changes in their markings, and how many years more of an ever changing Mikey can I expect? 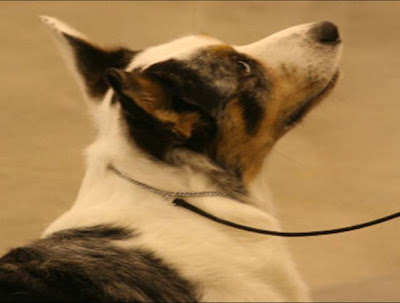 I got sam at two years old and haven't noticed any changes- his nails are all white. Wicca's markings have changed a bit- but just from 9months- to one year...now things aren't changing at all... 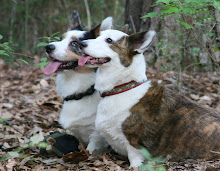 He is your Friend, your Partner, your Defender, your Dog. You are his Life, his Love, his Leader. He will be yours, Faithful and True to the last beat of his Heart. You owe it to him to be Worthy of such Devotion.